“Older than me, even my grandfather was not born then, very old” she said as she held out the queer little fruit we had heard of. It was probably a hundred years old, at least that is what the street vendor was implying.

On the very first day that we arrived on Diu, (a little coastal Indian town) , a random over friendly traveler struck a conversation with us and started telling is all he learned about the place. And that is when he told us about the strange fruit. It’s called Hoka, he had informed us.

“You will not find it anywhere else in India, only in Diu, they sell it at the beach for 10 rupees a piece,” he had said. And we told how the Hoka trees were probably planted in the town by Portuguese invaders in the 15th-16th century.

So when we saw the lady sitting and selling a fruit we had never seen before, we guessed what it was. She backed the random friendly traveler’s version – the Hoka trees were hundreds of years old, so were their fruits. We bought a dozen I suppose.

Red in color, the exterior was very sturdy and we had no clue on how to eat the fruit. When we asked her how it was eaten, she took a fruit and cut it with a knife and gave it back to us. The skin was not meant for eating really, it was the yellow flesh that was supposed to be eaten.

The texture of the edible bit was kind of a mix between sugarcane and an indian sweet called ‘sonpapdi’. And it tasted a little like a weird mixture of custard apple and mango. I only took a little bite, very reluctantly, just to know its taste. Going by the looks, the fruits did seem like they were trees for centuries before someone plucked them for sale.

The fruit can be kept in the open for 10-15 days and can still be edible, the lady told us. ‘Very good fruit, very rich in fibre,” she told us. The lady however also told us that it was an African community that planted the trees in Diu. And if one does a little research, it turns out that the tree is native to North Africa and the Arabian Peninsula. What is most interesting is that King Tut’s tomb had baskets filled with the Hoka fruit that were at least 3000 years old! Don’t know about their edibility. The seed of the fruit was apparently considered very sacred and was found in the tombs of many other pharaohs too.

So while the fruit was intriguing, the trees that bore them were a sight to see! They resembled coconut trees, but with a fancier hairdo. 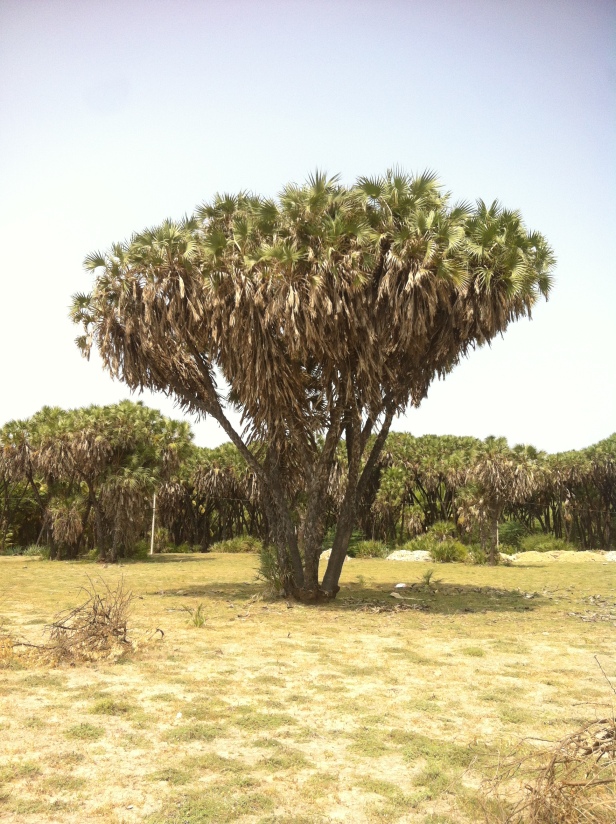 And that is what we learnt about the Hoka tree, that in India can only be found in Diu.